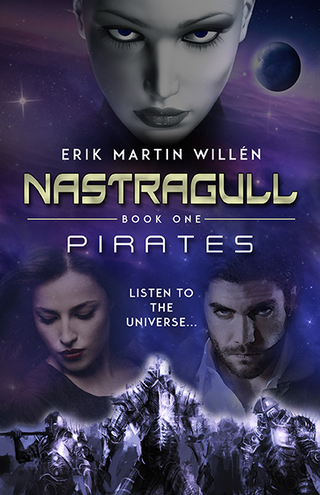 Click on the links below to purchase the book

NASTRAGULL: Pirates is a BLOCKBUSTER of a novel, a science fiction epic of an extent and scope not seen since Frank Herbert's Dune or David Brin's Uplift Sequence. The first book of a series, it also incorporates the swashbuckling action of classic space opera like E.E. "Doc" Smith's Lensmen series and Star Wars, accelerating the reader into a universe where humanity is just one species among many, in a multicultural civilization spanning many galaxies.

As the story begins, a group of cadets is heading home after eight years of training at a prestigious military academy when, unexpectedly, pirates attack their transport. After a pitched battle, they're taken prisoner. One cadet, Alec Horn, manages to escape along with the transport's captain, and together they set out to rescue their friends. There's just one problem: during Alec's captivity, he met a young pirate woman, Alexa...and the two fell madly in love. Little do they know that their forbidden love may literally mean the end of everything.

For the universe--or Nastra, to give it its proper name--is itself a living entity, one who speaks to us all, though few actually listen. The day you do listen to the universe and its parent, the creator GULL, is the day you truly awaken. Only two living people can hear those words: the alien warlord Marquessa De La Hoff, and young Alec himself. But the universe cannot allow more than one listener at a time. So, it must send out its only begotten child, the NastraGull, to set the universal balance right.

Otherwise, there will be no more universe.

The Vixens, volume 1, (work in progress)

"I am not afraid of people who are monsters, it is my own monster that I fear."

"Finally, something new in a genre of repeats”

‘The Lumberjack’ could be a modern equal of any Alistair Maclean thriller."